We arrived late at night and by the time we got through the airport it was around 10:00pm. We had arranged for a taxi to take us to our overnight reservation at the Hosteria Airport Garden (read our TripAdvisor review), only a short ride away from the airport. Though it was hard to get an idea of what kind of  place we were going to wake up to, we were both pleasantly surprised to find that it’s a collection of cabins and buildings all walled away from the rest of the city, a real home away from home. We had a room on the second floor of the main guest building, surrounded by the location’s gardens. 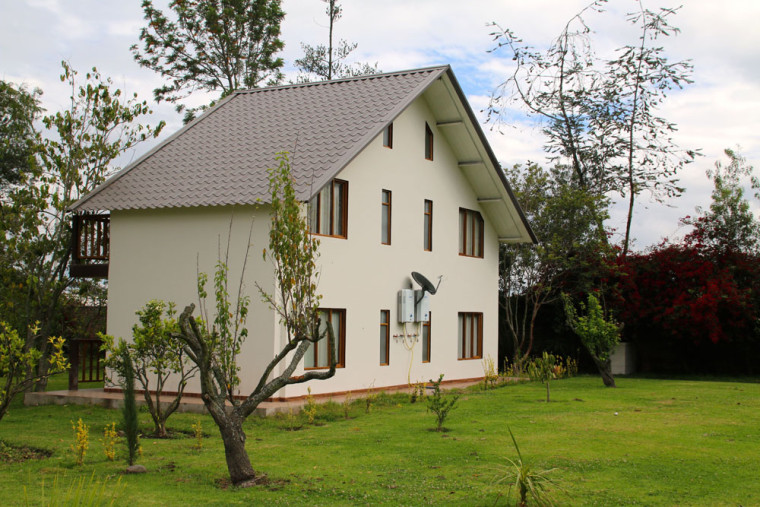 The next day we caught a taxi to Pifo to catch a bus to our next location only to find that the bus wouldn’t leave until that afternoon. We returned, caught our bus (a $3/person fare) and started what was for me a very nervous ride to some place far off. The bus station attendant constantly yelled “Ambato! Ambato!”, which only added to my confusion. Not only were we in a different country, but we had no internet service and no cell plan.
Pro Travel Tip:
We had learned earlier that we could download Google Maps a part at a time to your phone while on WiFi and use the GPS signal in the phone to track your location as you go. DO THIS – it’ll save a LOT of frustration later on. I was able to figure out that Ambato was the next main city on the route and that we only had to go one stop past it to get to Baños de Agua Santa, a mere 5-7 hour bus ride away.
We had dropped a bag off at the Hosteria Airport Garden before leaving (because we were stopping back by on our way through to Tena) so only had our backpacks. We looped our arms through the shoulder straps and caught some shut-eye for the trip down to Baños.
This entry was posted in Travel Log